THE FROZEN SLEEP: FACT AND FICTION

In the adventure epic DARC AGES the protagonist has himself frozen alive in 1999, and then stored in a nuclear-powered "sarcophagus".

He remains frozen for 900 years and is then revived. To lie dormant for a long time and then wake up is an old theme in fairy tale, myth and fiction. But how close has science actually come to realizing this dream?

The Long Sleep in Folklore, Literature and Movies

In the fairytale The Sleeping Beauty, a princess plunges into an enchanted sleep that lasts for many years. When she is awakened by a prince, she has not aged a single day.

Perhaps The Sleeping Beauty is the original inspiration for all later stories about long hibernations and frozen people.

In H.G. Wells's novel The Sleeper Awakes (serialized 1898-1903 as "When The Sleeper Wakes", novelized in 1910), an insomniac takes drugs in 1897, falls into a coma and wakes up in 2100. He finds an advanced, urbanized future with great class divides. Some of the story's prophecies have already occurred, such as the spread of wind power, and that future populations mainly live in cities while the rural areas are being depopulated.

In Stanislaw Lem's novel Futurological Congress (1983), the protagonist wakes up from a long slumber, and finds a seemingly idyllic future. But this "utopia" proves to be a chemically induced hallucination, causing everyone to believe that they live in a paradise. As the layers of illusion are erased, a miserable, depleted world appears.

In the movie Iceman (1984), a frozen Stone Age man is discovered in a glacier, and is thawed up unharmed. He was frozen while alive, but it is never explained how he survived this. The "iceman" never learns to understand the present-day world he finds himself in, and interprets it according to his own primitive, mystical concepts.

In Dennis Potter's TV drama Cold Lazarus (1996), scientists freeze a man's head - and then resurrect it gradually, hundreds of years into the future. However, this bleak future is governed by ruthless multinational companies, which plot to use the revived head for purely commercial purposes.

In literature, film and television the same warnings against long hibernation periods are constantly repeated: You do not know where you might end up, everyone you once knew will be gone, and the future may be worse than the present you left behind.

The Frozen Sleep in DARC AGES

The fictitious technology that keeps the hero David Archibald frozen in DARC AGES is not described in detail, and the story takes some creative liberties.

In reality, it is actually illegal to deep-freeze a whole living person - only those declared dead are allowed to be frozen.

The hero is revived in a world where there has been great progress in medicine (i.e., his cancer is cured without difficulty). To revive the dead, though, is impossible - just like in real life. So David Archibald is frozen while seriously ill, but still alive. (We will have to assume that his doctor wrote a fake death certificate.)

The freeze capsule contains both liquid oxygen and liquid nitrogen. The story does not go into exactly how the oxygen is used to keep the patient alive, or how the oxygen supply can last for 900 years.

The capsule has a radioactive battery that should keep certain systems running for hundreds of years. Is the power required to generate fresh oxygen to the frozen body? Is electrical stimulation used to keep the brain's consciousness alive for hundreds of years? This remains unclear.

The frozen body has also been infused with an "extract from the blood of Antarctic fishes" to prevent the body's cells from bursting during the freezing and thawing processes.

In the real world, scientists have discovered that Antarctic animals (fish, insects and amphibians) form their own "anti-freeze liquids" - special proteins that prevent the cold from damaging their cells.

Exactly how David Archibald is revived in the future is not explained. But the story depicts in intense detail his own subjective experience when the brain is awakened from its long slumber.

The "Sleepers" Of The Real World

Everyone knows that bears hibernate during winter. Many small animals are also dormant in winter: insects, frogs and other reptiles. However they are not frozen, but their metabolism is slowed down - they literally sleep.

But there actually is a creature that can survive a long time "in the freezer"! The very small tardigrade (tardigrada) is so tough that it can be frozen, or dried, and then revived.

If science ever succeeds in freezing and reviving living people, as in DARC AGES, perhaps the solution is to be found in studying "extreme" life forms such as the tardigrade.

Cryonics, the technique of deep-freezing dead people, has existed since 1967, and in modern medicine hypothermia (deliberate lowering of body temperature) is used to keep patients alive. 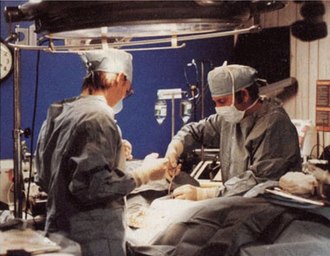 However, there are still no (official) experiments in deep-freezing a live human being, and no known technology exists to thaw a frozen human body and revive it.

The practical difficulties of deep-freezing people are many.

Cells and major organs can be seriously damaged by freezing. Chemicals can be injected into the body to prevent the formation of ice crystals, and this can eliminate such injuries, but does not solve all problems.

The biggest problem with modern "cryonics" is that people are only frozen after they die (usually only hours after death occurs). Advocates of cryonics argue that in the distant future, science will be able to revive even the dead - but how this would be done is not clear.

Will we ever be able to "cheat death", as the hero of DARC AGES tries to do? Will we one day be able to "sleep" our way into an uncertain future? As science evolves faster and faster, it would be unwise to say "It will never happen!".

If the dream of a technological "hibernation" is ever fulfilled, the "cryonauts" (time-travelers in frozen hibernation) must be be prepared for the unexpected. For just as David Archibald learned, they will discover that the future holds many surprises in store - both good and bad!